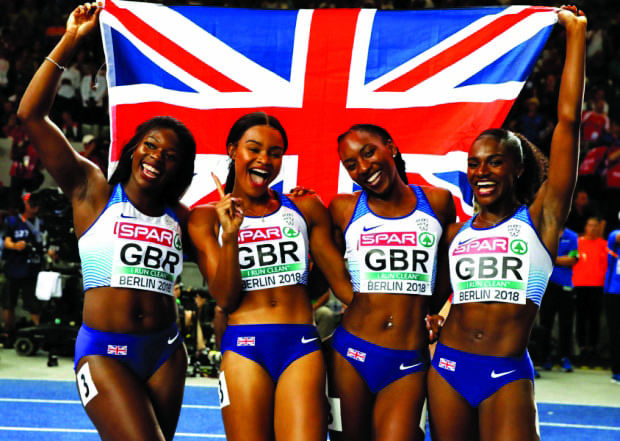 Four fabulous athletes, our victorious British relay team splashed across the front pages of tomorrow’s papers. They celebrate winning gold proudly in GBR vests. What colour are they?

Shall we send them back now? Yeah ok, so where shall we send them ‘back’ to: Engerland…? Independence is one of life’s greatest adventures but 48% v 52% is not independence, nor an adventure. It is merely half  ‘The People’ getting it wrong all at once. The full impact of the ugliest side of that pox’d phoney ‘the people have spoken’ Brexit vote came quickly.

Within weeks/months British people were being lined-up to be ‘sent back’. White-eyes and copycat rednecks were/are celebrating the notion of British/Englishness as non-European white, born bred and proud. As are these golden skinned athletes, with some of the same regional North, Midland, Southern, Neutral accents, with allegiances intact. To be born, bred and proud of an accident of birth is insane. But it rules the Earth.

This tiny island, once the World’s bigshot is now an irritating busybody, as it deserves. White accidents are no longer or more entitled. Perhaps, for us largely pink/grey bloated fake-tanned whitish accidents masquerading as supreme, there is a fair chance that: “your times is over…” (Butch & Sundance 1969) Fat chance.

The only truly pure white coloured man I know is a skinny vegan genius who lives like a cave spider in Streatham.