The point is made and proven all in one go by the Dacorum BC’s Town Planner’s. Imagine.
“I know George, let us shut both car parks at the same time, and see how those Berkhamsted buggers get on.”
A: Apart from missing the flat landscaped car space, at Lower Kings Road, we’ve known how – from the outset. We’re doing okay without you, thanks George.
Empty flat spaces, empty for months to the whole town. One vandalised out of all recognition and the other about to be.
Before you’re taken-to-the-gallows would you like to confess to being wrong? Nothing criminal (if you don’t count casual destructive vandalism to the whole town and High Street, alongside wanton destruction of corners of its natural beauty, not to mention the tranquility, stolen gratiutously in the name of ‘future planning’.)
So to it. What even do they know of the past?
What is their view and insightful understanding of the mistakes of history? So too, they have dug up and tank-tracked over the present, and have no idea, save guessing, of the future. In this of course, we are all in the same parking space.
Their guessing however, is becoming easier to calculate. It starts with sucking on the end of a pencil hoping for devine inspiration. Enter Council Officers. These are the public-purse public ‘servants’. They advise our elected councillors.
Remember, like another current debacle, big politicians and elected locals alike seem to have learned sweet fanny adams from past or present. They are advised by well payed officers/experts/advisors who know it all but somehow throw in crumbs for ‘The Greater Good’. And like Iago and Mrs Macbeth, they whisper it, until the hapless civic-righteous believe it, then spout it like it’s their very own deeply held, meticulously researched, objective thinking.
Try sitting through one of those Town Planning or Development ‘Control’ meetings. They show no control, even over their bowels, when a few wasted protests are voiced out from the Council Chamber’s public gallery. They show only mean, impatient contempt. (Gallery? A few chairs grugdingly laid out like funeral overspill). 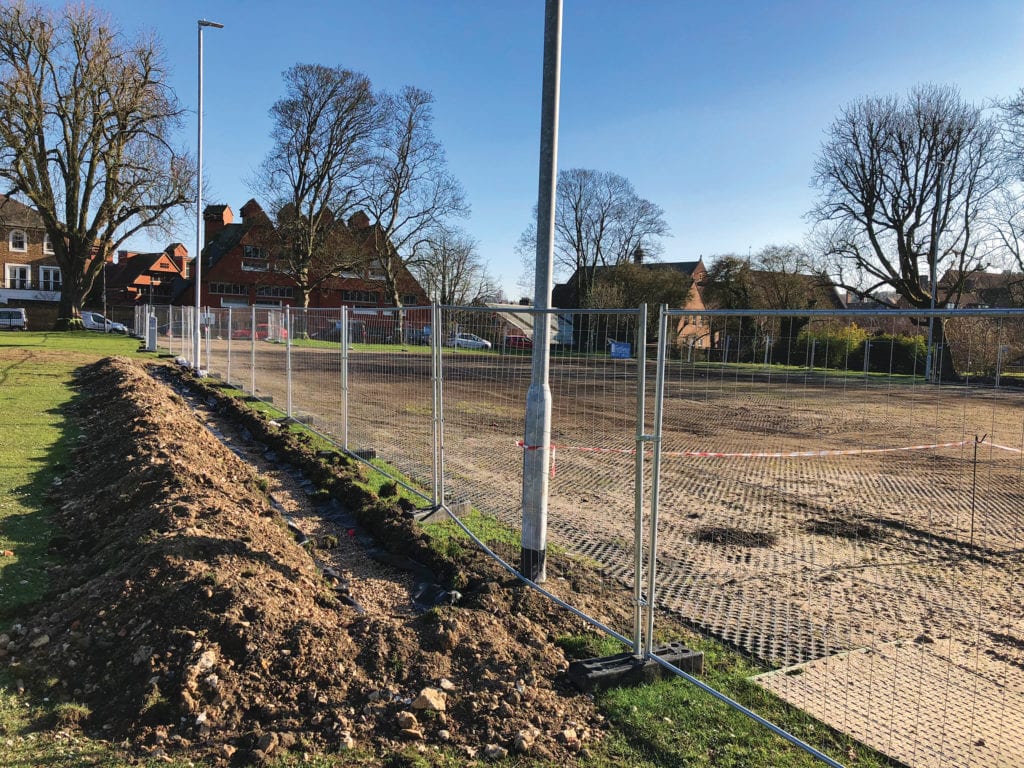 Waterlogged. Didn’t see that coming George? It’s okay we’ll dig trenches. “For a moment there, I thought we were in trouble…”

So here we are, as the pictures show. Their temporary demonstration of ill thought out vandalism is waterlogged and lies empty. It has lain empty for two months, out of three, and in that first January month, was hardly used, sparce and by no means ever full (see earlier R&P reports). The main carpark, closed from 2nd January remains empty, with not a brick laid for the proposed monstrous multi lump.
Perhaps, George, you have come to your senses whatever they might be, and decided alongside the Official whisperers, that the people of Berkhamsted in their resilience, by being denied, have proven how unnecessary is a multi lump as too, the unforgiveable official vandalism of a once beautiful town centre meadow.
In short Dacorum BC, as you have proven to yourself, during the busiest early months of the year, nobody needs or wants your town planning car lumps or dirtied broken meadow. So please, take your defeat in humility George, doff your cap, pick up your shovels and… “Pour away the canal and sweep up the wood. For nothing (you have done here now) can ever come to any good…”
(apologies WH Auden. ‘Stop All The Clocks’) 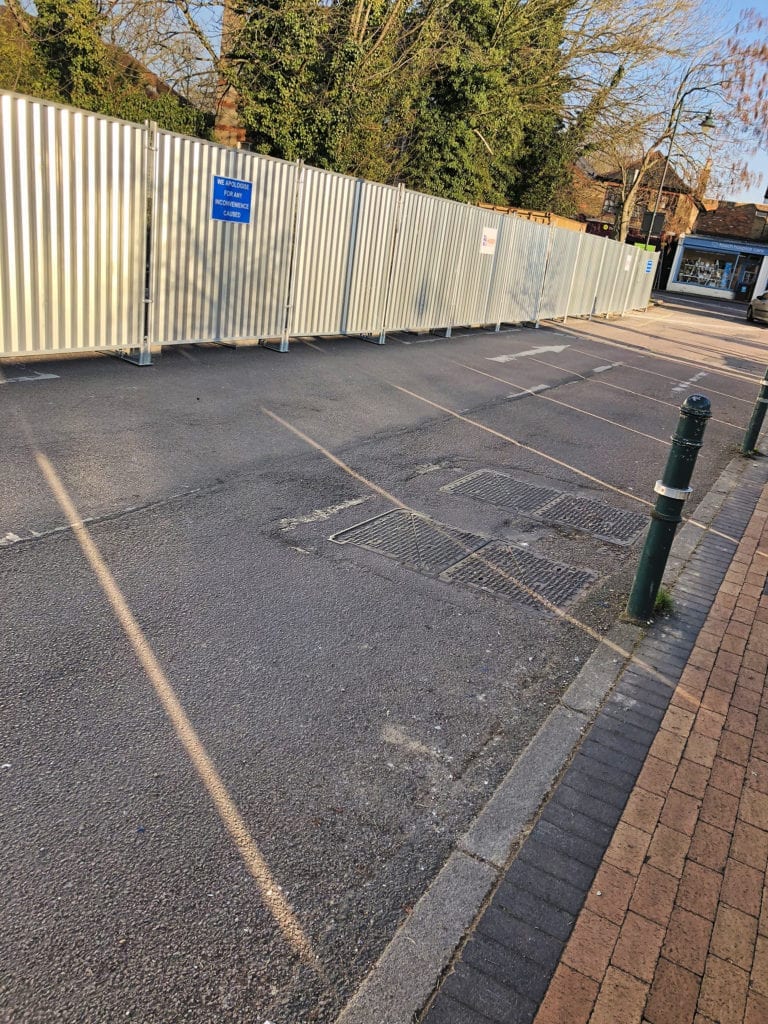 Ghost parking spaces created by late sunshine mocking through gaps in the fence.

A fence kicked down? Vandalism rewarded. 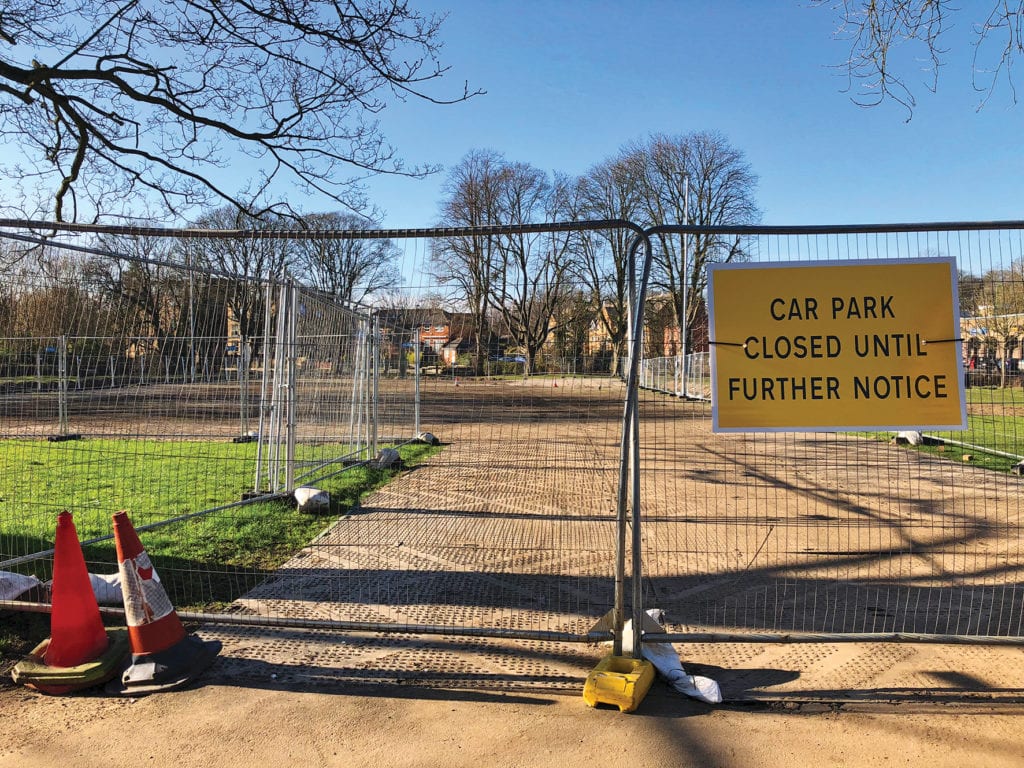 It would be tragic if it wasn’t so funny.