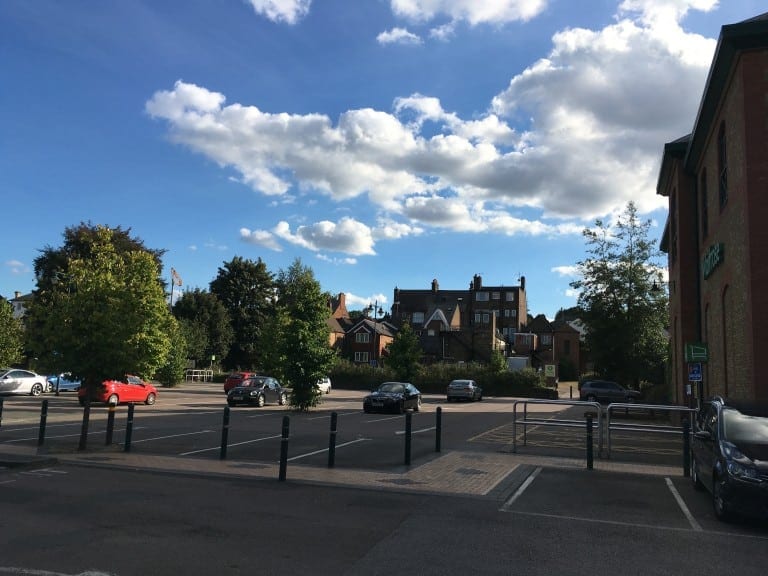 The full Council assembled below the visitors gallery in Hemel’s Civic Centre. Here is a summary of their interest uttered in grey tones, with very little to say.

These are the people we elected to represent us; our opinions, needs, hopes and wishes for the well-being of our community in this small Hertfordshire market town.
It was more unedifying than anticipated.

All upstanding for the entrance of the Mayor dressed in full regalia, it was the kind of thing you might imagine to have carried on as the Titanic went down. Complete disregard for the New and these fast moving times which curiously, I didn’t mind, until they started to speak. The chamber, seating forty or fifty elected Councillors, took up three long sides of two tiered fixed benched tables and chairs set in a square looking into the middle. The fourth side was the high table where sat the presiding mayor and his seven or eight fiercely official looking henches.

With the Berkhamsted multi storey car park number 5 on the agenda, the meeting began promptly at 7.30. It whistled through the agenda to number 4, whereupon we thought we would be next, which we were, but not for a grinding 80 minutes more. At agenda item 4 it stopped dead. This was for Councillors departmental or portfolio reports. Hence one grey voice after another stood up to report, question, comment or quip.

Apart from the smuggery, the worst was the lightweightness of it all. What they were reporting on seemed incomprehensible to us up in the visitor’s gallery. It was like peering down on a jolly, private soft-core-politics debating club. We couldn’t tell who was who. The talk was all about Hemel, with all three parties jousting across the void, their best non-funny one-upmanship quips. The Watergardens reconstruction was unanimously praised for taking an age, causing fantastic disruption and costing the earth. In fact every inconsequential item drew praise for Hemel. They seemed rather pleased with themselves and very pleased with Hemel.

Then from nowhere came a smarmy motion to formally congratulate the new Prime Minister, with one insignificant Councillor creepily declaring he would be ‘meeting her next week’ and would pass on Dacorum’s ‘warm congratulations’.
Then there was that Brexit moment. There were Brexit in-jokes from the start, but again from nowhere and for no reason, the youngest and possibly dullest one in the room (even with such flaccid competition) unable to contain his excitement any longer, with a line prepared earlier, he ‘moved’ to stand and ask why the European Union flag was still draped on the side wall.
With his moment over he sat to patchy guffaws. Back slapping, pally rivalry in a circus where the clowns run the show.

Then finally item 5: Berkhamsted’s presentation of a petition to stop the multi storey car park in Lower Kings Rd. I forgot to mention, they all had laptops, tablets and various devices. As soon as this Berkhamsted item came up, you could feel the room turn off as they got sucked into their handsets etc.

I hadn’t fully seen before how dangerous a demonstration of bad manners can be.
Three speakers from Berkhamsted put the case for Dacorum to endorse the petition and support further investigation before the Development Control committee (DCC) decides on it in September. They did very well but not well enough against such an empty room.
Bearing in mind some of these ill-mannered councillors will be on that deciding DCC. Few stood and paid lipservice to the petition, but each in turn said in their opinion, Berkhamsted needed a multi-storey car park. Their reasons were as slight as their attention and based on little more than there are too many cars, so a multi storey in the centre of town, is the answer.
One cited the local Chamber of Commerce was in favour. So what! was the collective sigh from the gallery. Do Chambers of Commerce made up of self-interested, unelected individuals have a block vote?
It seemed doomed already.

My conclusion of the meeting was that the Dacorum Borough Council has little interest in much outside Hemel, yet our elected representatives lazily spout their ill informed opinions having given item 5 scant attention. Why do elected representatives need reminding they were elected to represent our interests, the interests of the whole Borough, not Hemel alone, and that their own tired opinions don’t count. Not interested in their Beano and Dandy opinions.
It was an ugly empty experience which reminded me, people who put themselves up for office of any kind, and are often the wrong people. They’re not curious or inquisitive and certainly not bright in any sense of the word. Most of the 50 people in the room seemed bored or disinterested, and to a man and woman, not one of them closed down their devices to pay full attention to item 5.
On the evidence of the way they treated the need for stronger, more solid research than their flimsy, idle opinions, they are not people we can trust with Berkhamsted’s well being. So let’s fight them.

The following was sent to Dacorum BC to inform elected representatives of their duty to research all aspects of environmental impact on the well being of life here, before speaking.
It was sent by a Berkhamsted resident of many years in response to the Rex R&P piece in May.

I was moved to submit an objection to the planning application.
The proposed development lies within the centre of the Berkhamsted Conservation area boundary (designated 1969) and its design appearance and materials do not conform to the policies described in Dacorum Borough Council’s Local Planning Framework

Policy 120.1 Designation as a conservation area
provides the opportunity to preserve or enhance
an area of architectural or historic interest by
controlling building demolition and the design,
scale and proportions of extensions and new
development, as well as the type and colour of
materials used.
Policy 121.1 There is a need to control
inappropriate types of permitted development
which would be detrimental to a conservation
area. (Dacorum Borough Local Plan 1991 – 2011).

I believe that this development would be highly detrimental to the character of the Berkhamsted Conservation area. BKJ Berkhamsted (May 2016)