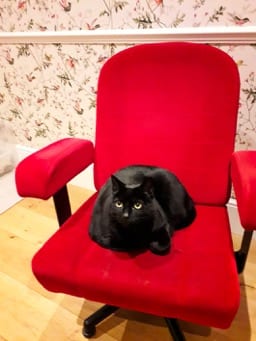 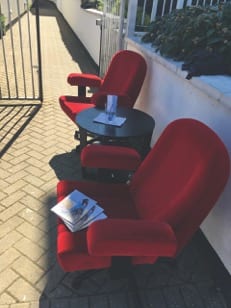 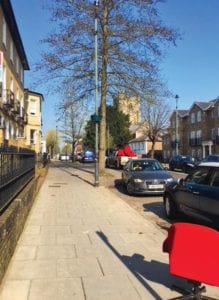 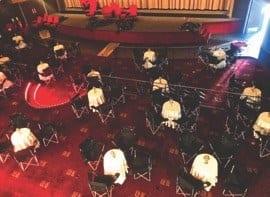 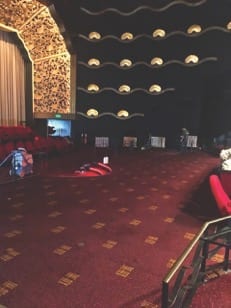 First thing on Friday 20th April 100 new chairs would arrive from Paris. Quinette the French company who have supplied all the chairs at the Rex and Odyssey from the outset, were fully prepared and organised for an overnight sailing.
The timing of the delivery had been arranged for months. It was to be a smooth operation with everything in place. Even the carpets had been professionally scoured over night. The Rex gang, ten of us, were there at 7am to meet the lorry (not me, the ‘us’ is royal) and the sky had turned to sunshine, perfectly timed to beat March and April’s interminable winter. The old chairs downstairs, now 14 years old were thinning and losing their swivel. But reluctant to scrap them, we sold them for £20 each to those who would cherish a Rex souvenir. So all was in place, the gods were smiling, what could go wrong…
By 9:00 when I turned up, they hadn’t. Umpteen calls to and from Paris later, they were stranded at Calais – and would “not be coming today”!
By now half the old seats had been eagerly collected by their new owners. Uh oh! With the Rex gang still here and the office staff now all present, we put our heads together. By midday-ish, after a number of hair-brained ideas, including cancelling the whole weekend’s sold-out programme, or hiring ridiculously expensive ‘unarmed’ wedding chairs, we alighted on camping chairs, no less hair-brained, but with arms and a netted cup holder. One of our boys, in truly resourceful Han Solo style, found a company in Milton Keynes, who could supply the hundred we needed, so off he went to collect them in his own, somewhat cramped, Millennium Falcon. Returning an hour or so later we set-to, setting them around tables to make it look like nothing was out of place.
By 7:00-ish, the audience were bustling in for the sell-out Three Billboards… We caught most of them in the foyer and ‘explained’. Then to soften the blow, if not the chair, we left a voucher on each seat. But nearly all laughed and took it in good humour, before they knew or went down to find an envelope on their chair. The unanticipated and funniest, almost a ‘Titanic’ moment, was ‘cushion-rage!’ We have about 60 cushions, and whilst there was no rage at all, there was a certain kerfuffle if someone had taken more than one!
Graciously everybody took it all in good spirit over the whole three days, with only very few who left, and even they were kind about it.
The best story came from Catherine Rogers who sent us this picture of her cat Hank curled up on a comfy Rex chair at home, while she and her family were here, sitting in ‘velveteen glamour’ (Guardian) watching a ‘brilliant programme’ on camping chairs…!
In the all’s well that ends well dept, the new seats arrived on Monday (23rd) in time to be painstakingly assembled by the Rex gang, for a sold-out screening of Sweet Country. Sweet country indeed, we thank all those who came, saw the fun in it and made no fuss. Fantastic,
well done and thank you.
Ps… if you have fallen for (or off) one of our camping chairs, they’re here, going for a
fiver each. 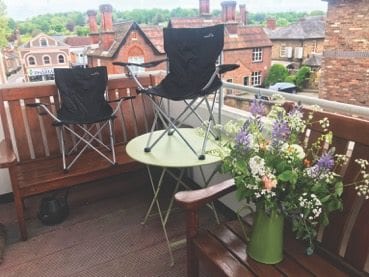