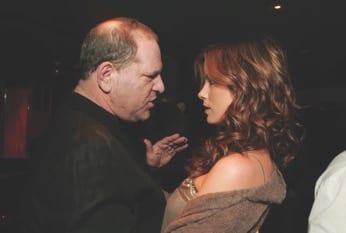 Must be the oldest line in Hollywood (and the music business) and if ever there was a caricature of a sleazeball film mogul with a fat cigar and fat face to go with it, nobody could have drawn it better than Harvey W’s.
It is probably ‘face-ist’ to judge someone so. Yeah right.
You wouldn’t cast Eddie Redmayne to play him in a biopic would you, but you’d give it to Russell Crowe in a flash. So with the history of starlets going to fat cigar hotel rooms since the silent movies of the 20s, you might think these women as young girls may have cottoned on earlier, or at least, listened.
“… She was young, she was beautiful… and to show you it’s not all dollars and cents, she was the best piece of ass I ever had, and I’ve had ‘em all over the world..!” (Woltz from The Godfather 1972, and soon to be making out with a horse’s head). To be fair to the fat faced ones, Woltz was cast as an old, short-arsed, fat cigar mogul.
The great pity for us (all) is that the Weinstein brothers’ early company, Miramax, championed some of the consistently best independent films to come out of Hollywood for over 30 years.
We can only hope the company carries on with the gifted bunch of screenplay spotters they have on their team, without being marred, blamed or tainted by Harvey’s fat cigar, and that we can still show their films here at the Rex.